Vincent Van Gogh The Hill Of Montmartre With Stone Quarry
1886 Fine Art Painting
The Montmartre paintings are a group of works that Vincent van Gogh made in 1886 and 1887 of the Paris district of Montmartre while living there with his brother Theo. Rather than capture urban settings in Paris, van Gogh preferred pastoral scenes, such as Montmartre and Asnieres in the northwest suburbs. Of the two years in Paris, the work from 1886 often has the dark, somber tones of his early works from the Netherlands and Brussels. By the spring of 1887 van Gogh embraced use of color and light and created his own brushstroke techniques based upon Impressionism and Pointillism. The works in the series provide examples of his work during that period of time and the progression he made as an artist.
The Hill of Montmartre with Stone Quarry(F229) was but one of van Gogh’s paintings of the Montmartre countryside. The apartment where he lived with his brother bordered the countryside and overlooked the city of Paris. At the time the painting was made, the country landscape was beginning to disappear as a result of the city’s expansion. Soon the fields, pastures and windmills would largely disappear from the Montmartre area. Van Gogh draws the audience in by use of the diagonal line of fences to the windmill just right of the center of the picture. This technique also established depth in the work. 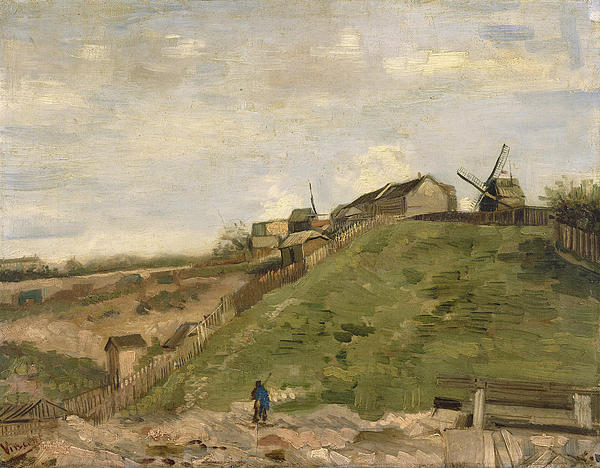