Ogata Kōrin was a Japanese painter of the Rinpa school. He was born in Kyoto to a wealthy merchant who had a taste for the arts and is said to have given his son some elementary instruction therein. Kōrin also studied under Soken Yamamoto, the Kanō school, Tsunenobu and Gukei Sumiyoshi, and was greatly influenced by his predecessors Hon’ami Kōetsu and Tawaraya Sōtatsu. On arriving at maturity, however, he broke away from all tradition, and developed a very original and quite distinctive style of his own, both in painting and in the decoration of lacquer. The characteristic of this is a bold impressionism, which is expressed in few and simple highly idealized forms, with an absolute disregard for both realism and the usual conventions. 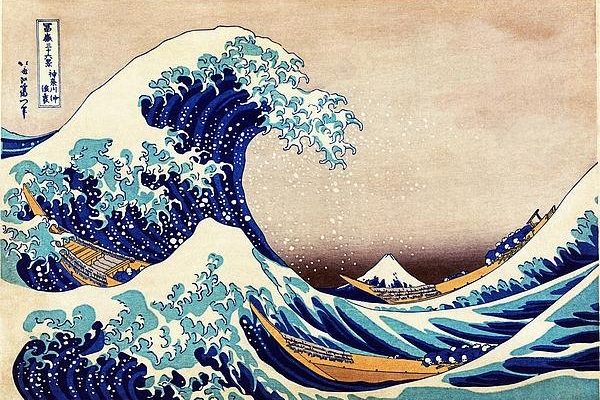 The Great Wave off Kanagawa (also known as The Great Wave or simply The Wave, is an ukiyo-e print by Japanese artist Hokusai, published sometime between 1830 and 1833 in the late Edo period as the first print in Hokusai’s series Thirty-six Views of Mount Fuji. It is Hokusai’s most famous work, and one of the best recognized works of Japanese art in the world. It depicts an enormous wave threatening boats off the coast of the prefecture of Kanagawa. While sometimes assumed to be a tsunami, the wave is, as the picture’s title notes, more likely to be a large okinami (“wave of the open sea”). As in all the prints in the series, it depicts the area around Mount Fuji under particular conditions, and the mountain itself appears in the background.